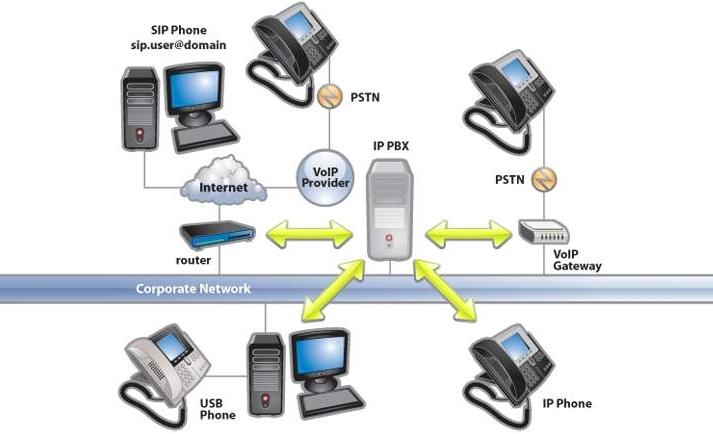 VOIP (Voice over Internet Protocol) is the technology for voice conversations with Internet network or any IP . This means that, it sends the voice signal into digital form in packets rather than send it in digital form or analog circuits using a mobile phone company or conventional PSTN (acronym for Public Switched Telephone Network).

The protocols used to send voice signals over the IP network protocol is known as Voice over IP or IP protocols. These can be seen as commercial applications of the “experimental Network Voice Protocol (1973) invented for the ARPANET.

Voice over IP can drive through any IP network, including those connected to the Internet, such as local area networks ( LANs ).

It is very important to differentiate between Voice over IP (VOIP) and telephony over IP.

VOIP is a set of standards, devices, protocols, ultimately the technology which enables voice over IP protocol.

Telephony over IP phone service is available to the public, so numbered I.164 , made with VOIP technology.

The first technology for telephony over Internet is presented in February 1995 year of VocalTec . The proposed Internet phone is primitive compared with the available technology today. The software was originally designed to run on a computer with 33 486 MHz processor or higher, whereby the user will talk with another user using a modem to the computer sound card ( speakers and microphone ). In the process of transfer, the software transforms (compressed) voice that is spoken into the microphone. Then the compressed voice is transported over IP packet data format as a standard Internet session. With this technology, however, the conversation is limited to two computer user (PC to PC).

About a year later, in March 1996 year, again the company VocalTec announced that it will work with other companies for production of hardware called the Voice Gateway, which enables audio connections between phone and Internet phone with the public switched telephone network ( PSTN ). There still remains a challenge, namely how to address and reach the user on a computer located anywhere in the world. To that end user needs to know IP -address of the remote computer, and it is not easy to find if there was no previous contact with him. Voice Gateway is looking for another one, which is stored telephone number of user searches. Telephone number is easier than IP-address. Thus the functionality of the Voice Gateway deal simultaneously with barriers to grid connection and addressing.

Upon receipt of an analog voice (standard voice) by telephone, Voice Gateway first digitized signal and compress the new digital signal in the form of standard data blocks, known as IP packets. They are sent over the Internet to the entrance of the Voice Gateway, where the process is reversed. With this technology it is possible to make three different types of calls: PC to PC, PC to phone, and phone to phone.

The process of Internet telephony starts calling – the system computer, microphone and headphones, wanting to connect to the called party – the phone from the public telephone network). A provider of Internet calling taking the necessary software connects to the called party and a telephone number to the ISP that provides service (VOIP). Using a microphone, caller party then talk to him and the voice signal is transferred to the Voice Gateway, where it is digitized (if the signal is not digital). From here, IP packets are transferred over the Internet on the road, which is determined by the Voice Gateway to the supplier until it reaches the remote Voice Gateway. It in turn becomes IP packets in the voice signal and transfers the voice of the local PSTN to the called party. From here, the phone of the called party will signal incoming calls. Both sides can conduct fully directional (duplex) conversation. The same example can be easily described and links PC to phone and computer to computer.

And to methods for transferring data and VOIP in developing standards to achieve uniformity of treatment and transport. To achieve interoperability, standards are created by software that a company can connect with software to another company. H.323 and SIP standards are warning calls while G.711A / U, G.729 (b), Standards G.723 for audio encoding, through their various software and hardware devices are able to communicate over the Internet.

In addition to the standard set of software development for telephony over the Internet at any connection, PC – to – PC or PC – to – phone, the hardware must also adhere to the minimum system requirements. The software phone VocalTec inc. not require processing of 486/33 MHz, and today most software products require at least 166 Mhz processor. Sound and network interface for connection over the Internet to have duplex mode. With increasing system requirements and increased quality of voice in the conversation. Traditional speed signal transmission are approximately 64 Kb / S. While some users still connect at speeds under 56 Kb / S, they also receive relatively good sound quality. Voice quality decreases when the speed of the connection decreases.

Internet telephony has two primary advantages of working in favor of consumers.

There are still people who do not have Internet access at home. Although their number is constantly decreasing, the problems with electricity simply can not make calls while in “normal” phone, you can always do it because it is powered by a telephone cord itself. And more: as in all other ways of exchanging information on the Internet and VoIP using “packages”. Since, however, everything that happens in real time at a bad connection, some of the packages must be deliberately “lost”, which leads to fragmentation of audio / video signal. Overall performance of VoIP depends mainly on the connection speed and the distance between the points of connection. In this technology generated traffic causes a certain delay and virtually negligible packet loss due to the nature of the telephone network. Networks with IP traffic on the other hand, for the most part do not contain any prioritization of traffic – i.e. packets containing voice and video, are treated equally with all other packages (e.g. packages generated by P2P or BitTorrent ), which leads to the following problems:

The main way to solve these problems is the use of network equipment that supports prioritization of packets along the link.

3 thoughts on “VOIP (Voice over Internet Protocol) Architecture And Features”