Virtualisation is the process of running virtual instances of computer systems, abstracted from the actual underlying hardware. You can have multiple Operating Systems (OS) running simultaneously on single hardware where each OS is a virtual instance isolated from other. These OSs are termed as virtual machines (VM) which can be stored as an instance for backup, used for software testing in various environments, migrated to another location altogether.

Example: An enterprise server OS crashes along with the hardware. As the OS was a VM, the system administrator of the enterprise easily picks-up its backup VM (VMs are stored as image files — a snapshot of the original instance) and deploys it on other working hardware in minutes.

VM creates a whole OS. But we can also create virtualised application packages that can run on different platforms same as a VM does irrespective of platform, using ‘Docker and Containers’.

Docker is an open source ecosystem of tools to create, manage and deploy applications for any platform. The general idea is to create applications, package them together into containers and ship them for deployment. Docker is a virtualisation technology. It allows applications to use the OS of the computer on which it is deployed (Client) and ships only that parts of the application (that is, the libraries, dependencies, supporting applications, etc.) that are not available on the Client. With the help of docker, we create containers containing applications that are consistent irrespective of the platform. Docker is available for the Linux, Windows and Mac environment.

What is a Container?

A Container is a bundle of applications with all its dependencies that remain isolated from the guest OS (Client), on which they run. A software developer can package an application and all its components into a container and distribute it for use. The containers created by the docker are called Docker-files. They can be downloaded and executed on any computer (Physical or VM) because it will use the resources of the guest OS for execution, as explained in the previous point. Containers are very similar to VMs. Open Source tools like Kubernetes, Ansible and OpenShift can be used for efficient management of containers. How is a Container different from a VM?

Containers and VMs both use the concept of virtualisation. Though containers work like VMs, they differ in their capacity. A VM creates a complete OS but containers create only specific components on a guest computer, which are needed to operate. Unlike VMs, Containers do not need hypervisors and hence, we can rid of installing the useless components of VM. Containers have a small footprint on the system than a complete VM. 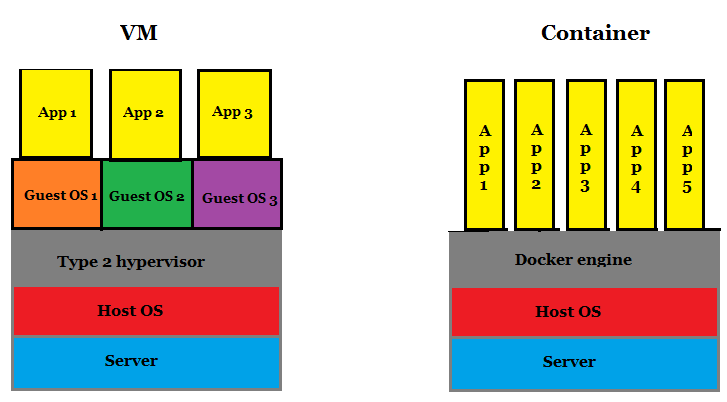 How does the Docker work?

The Docker has a client-server architecture. Docker client communicates through REST API with the docker daemon which is available on the same machine or can be on a remote machine.

Which are the other components of a docker?

The various components that make up a docker ecosystem are:

What are the advantages of docker containers?

Is containerisation of Docker, a unique concept?

Apparently No. There are services on the web (Software as a Service) that work like a container and were available long before since the release of Docker. Example: Web services like Youtube, Google Drive and others, irrespective of the platform you are running on, these services pack the required components together to run efficiently on your computer system. Although the open-source Docker is widely used and dominates the containerisation market, there are alternatives to it like the proprietary VMware vAPP, Opscode Chef, Canonical LXD, Virtuozzo, etc.