Blockchain has been making headlines lately for the central banks across the world who are exploring possibilities of bringing in the ingenious technology to mainstream financial transactions. Geeks, on social networks and technology forums, are extensively debating the blockchain revolution that perhaps, is inevitable in the near future. What is the buzz all about? Is it just another fad, a bubble that will eventually burst? Or is it here to  change the traditional way of digital transactions. Let’s explore if it is as revolutionary as they say.

Blockchain is a new technology developed by Satoshi Nakamoto – a pseudonym of a person or a group, as no one knows anything about it. It is a distributed database or a file – which is stored in multiple computers located at different locations and the database processing is distributed among them. The BlockChain database is a continuously growing list of Blocks- records of financial transaction, bitcoin exchanges, trade contracts or anything of value between two parties. It was originally developed for maintaining the BitCoin (BTC) transactions but it soon found applications in other areas.

A peer-to-peer (P2P) network which consists of many voluntary participating nodes, validates a transaction and add into a block. The block is then appended to a large data structure of blockchain. Every node is an administrator of the blockchain, and joins the network voluntarily (however, each one has an incentive for participating in the network: the chance of winning Bitcoins). A global network of computers uses blockchain technology to jointly manage the database that records transactions. It is hard to manipulate a record once it is added to a blockchain.

In short, blockchain is like a digital ledger which is distributed over many computers and continuously addss records like in a queue. Its network is similar like  BitTorrent (P2P), wherein the transfer is done between the users rather than a powerful central server. 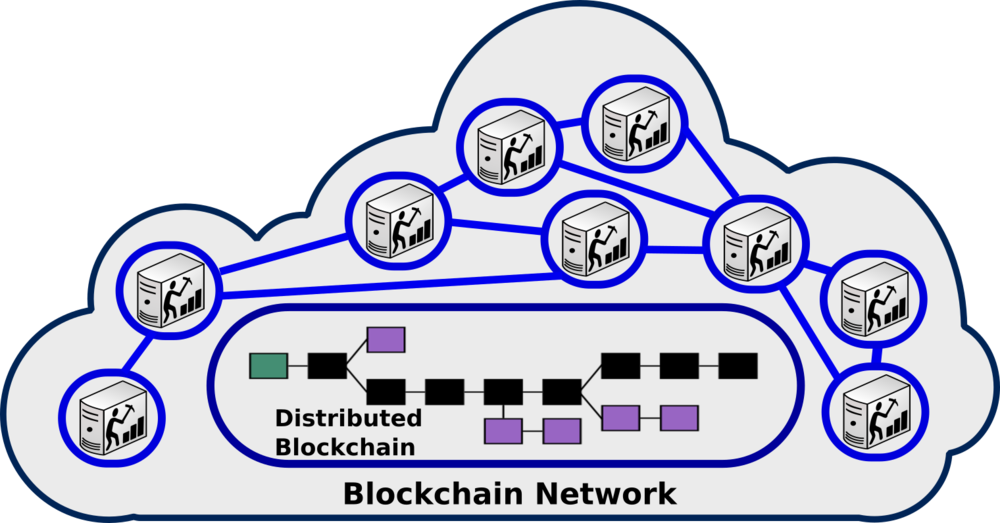 The following figure illustrates working of blockchain when you do a transaction. If anyone can participate in the blockchain network, is it secure?

The blockchain is replicated across all the participating nodes (computers in its network) to ensure that each node has the same list of transaction history at any time. Therefore, the blockchain eliminates the risks that come with data being held centrally at a location. Its network does not have centralized points of vulnerability that unethical elements (hackers) can exploit.

Blockchain encrypts the blocks that are added to the chain. Encryption here is the combination of public and private keys- public keys being the address of the users on the blockchain network. An address looks like 1K31KZXjcochXpRhjH9g5MxFFTHPi2zEXb. Any transaction between the parties is recorded by their addresses which are difficult to track making the involved parties anonymous (That is why ransom was demanded in bitcoins to stop ransomware attacks).

Each block added in a blockchain has:

If anyone wants to meddle with any of the data, they have to regenerate all the fingerprints from that point forwards and the blockchain will look different. This is very unlikely because it is very time consuming and requires tremendous computing power.

Additions to blockchain are publicly viewable and verified. This makes all the records transparent while unalterable.

If a blockchain continuously grows, how are new records added?

Blockchains uses peer-to-peer model of communication. As there are many nodes validating the record, there are chances of conflict. Blockchains implement an algorithm to avoid or resolve such conflicts. The algorithm looks for new records every ten minutes and it adds  to it to further the chain. Blocks of records in the same timestamp are added as branches to the block of the same timestamp.

What are the types of blockchain?

What are the advantages of blockchain?

Apart from the decentralization and security explained above, some of the other advantages of blockchain are:

What are the disadvantages of blockchain?

The only cons of blockchain are:

What are the potential applications of BlockChain?