Cloud computing is a buzzword today in the Information Technology (IT) industry. It is a technology wherein the computing resources—hardware and software, are pooled together into a remote repository (a cloud) and offered as a service to users located worldwide. The benefits of cloud computing have been compelling many organizations to move onto or adopt it. A cloud can be deployed in various ways: Infrastructure as a service (IaaS), Platform as a service (PaaS), Software as a service (SaaS) etc. Deployment of a cloud is no more a complex task with the tools like OpenNebula, Eucalyptus, Microsoft Azure, VMware vsphere, OpenStack etc. Here we will learn about OpenStack.

OpenStack is an open source set of tools to deploy a cloud. Managed by Open Stack foundation, it is a software which we can use to build Infrastructure as a Service (IaaS) platforms—public as well as a private cloud. It helps to deploy interoperable cloud services like Virtual Machine (VM) and other instances, book more storage space, restart or re-image servers, read and write files to storage, create cloud applications etc. This helps to avoid vendor lock-in, enabling easy horizontal scaling of services (Adding and removing instances instantly). The software also displays all the components like multi-vendor hardware and networking resources in a cloud.
Users can manage OpenStack based cloud through a web-based dashboard, command-line or RESTful web services.
(The following depiction is of OpenStack Dashboard) 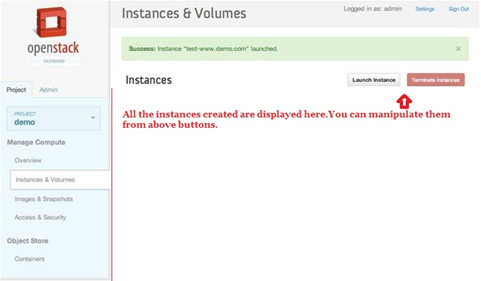 How has it evolved?

Initially, in 2010 it began as a project between the NASA and a private company. The project is now patronized and used by many organizations and its large community of users. Due to its large user base who can contribute to the open source OpenStack, it is regularly updated with new components. CloudStack, Eucalyptus, AWS etc. are competitors of OpenStack.

Where can OpenStack be used?

OpenStack is cloud management tool. It can be used to establish a new cloud and manage it. It is used by cloud service providers (CSP) in their data center. Organizations can also use it to manage their private cloud. It can be used in software development and testing. Virtualization is achieved by OpenStack.

How is the architecture of OpenStack?

The dashboard displays all the resources in the deployed cloud. We use various components (their API) to create instances. You can also use the OpenStack command-line client on Linux and macOS to execute commands that make API calls.

What are the components of OpenStack?

OpenStack has about 24 components or tools that are helpful in implementing a cloud. However, only the following components are the important ones.
Note: These can be used from the software GUI. Each component has its own command line client as well, so you can use those components by firing commands in their respective command line client.