As you know, by means of VMware ThinApp, which is part of the solution for desktop virtualization VMware View 4.5, you can make the delivery of virtualized applications to users.

That is, the application is packaged into a single exe-file and deployed on user workstations using msi-installer (see here how it’s done with the VMware View 4.5). It is very convenient for mass deployment and maintenance applications. Remember this product Thinstall, through which made pre-installed applications? So ThinApp – this is it is only now under the name VMware.

But there is another way to deliver applications with VMware ThinApp – an opportunity to launch their users with a shared network folder (SMB Share): 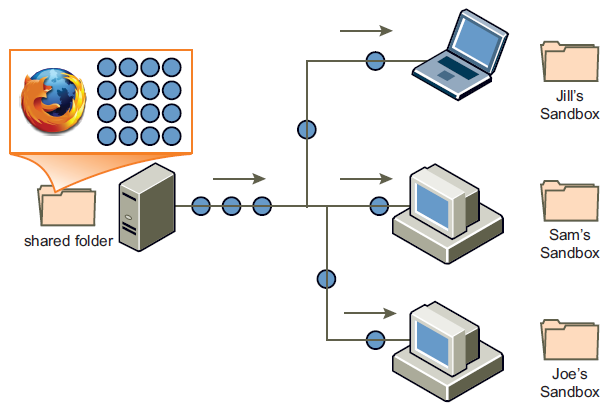 In this case, unlike the first method of deployment of virtualized applications (on the local drives of workstations), this method can deliver the application on the workstation in blocks – as demand application of the data. Approximately as follows: However, when we annex VMware ThinApp runs constantly, and many users use it – then how do we update it (eg a web browser, packed in a file firefox.exe)?

In fact, there is an interesting mechanism: you can put in a folder with the application of its updated version, but with the extension is not *. exe, and *. 1 – and all new connections will use it!

1. You pack application firefox.exe using VMware ThinApp and put it on the SMB Share.

3. Users begin to use it – the file is locked firefox.exe.

4. You create a new package with the help of VMware ThinApp, call it firefox.1

5. All users connect to the old firefox, but the new treatment to firefox.exe – redirected to a file firefox.1 – and users use the updated application.

6. If you need another update – make a package called firefox.2 etc.

If users stop using firefox.1, started using firefox.2, firefox.1 can be removed. But! Never delete firefox.exe, since it indicates an application shortcut on the desktop user.