Some of Microsoft’s platform products are specially dedicated to enterprise scenarios and specific. This is the case of BizTalk Dedicated Server, an application integration engine, which has evolved greatly over the past 10 years.

I have worked with BizTalk from time to time, throughout its various versions. Much has changed since the 2000 and 2002 versions, where neither integration with Visual Studio had. It was a pain!

The list of versions of the platform appears below:

Today, the product is in its 2010 version, complete and well being positioned as a platform for application integration (EAI), providing connectivity to various platforms and market systems, Business Process Management (BPM) capabilities and SOA / ESB . The platform also includes capabilities for integration of climate Business to Business (B2B), adapters, accelerators and full support for RFID scenarios.

Quite a bit! In the Indian market, some companies have found working with versions 2006 and 2006 R2 in solutions integration, orchestration and messaging treatment with great success.

A simplified diagram of the BizTalk messaging model appears below, for those who still do not know: 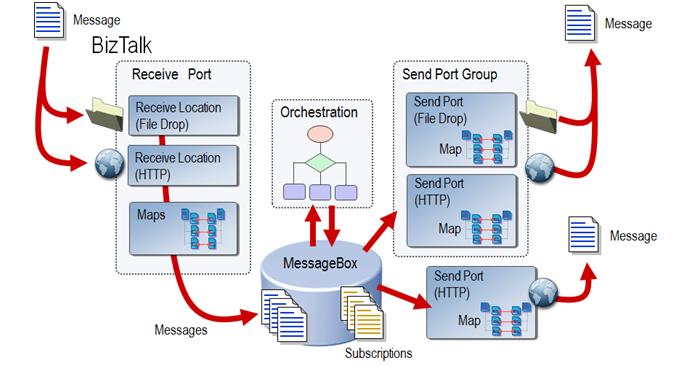 Above, we see happening via MessageBox messaging, where every message received at the entrance doors are persisted for consolidation, underwriting and processing of pre-defined orchestrations.

Another interesting aspect of an EAI platform is the ability to integrate local services with services published in the public cloud. Whether through a consolidation via a bus service or simply publishing a cloud services, an EAI engine should allow this type of centralization, facilitating the abstraction of the various infrastructures involved in the solution.