Block Storage and Object Storage are two methods of data storage. Let’s see in detail what it is and what services they offer.

It is very important to understand what the Block storage and Object storage is as they play a key role when it comes to optimizing the use of Cloud services, particularly in storage and the creation of local infrastructure projects. See below what it is in the detail. 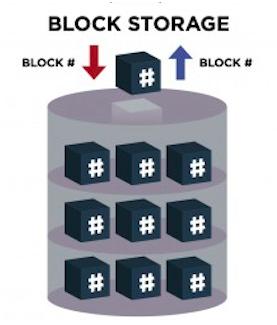 Because volumes are treated individually as hard drives, the Block Storage works well by storing a variety of applications such as file systems and databases. While storage devices tend to be complex and expensive, the Block Storage tends to be more flexible and provides better performance.

The block storage devices offer a storage capacity fixed. Each volume can be treated as an independent disk drives controlled by an external source. This device can be mounted by the host operating system as if it were a physical disk. The most common examples of Block Storage are San, iSCSI and local disks. They system of Block Storage is the one most commonly used for most applications and can be local or via the network. The devices are usually formatted with a file system FAT32, NTFS, EXT3 and EXT4.

When using the Block Storage?

The block storage is ideal for databases as they require high I/O performance and low latency connections feature. It can be used for RAID volumes where multiple disks are combined. Each application that needs processing as Java, PHP and .Net need of Block Storage, ditto for critical applications such as Oracle, SAP, Microsoft Exchange and Microsoft SharePoint. 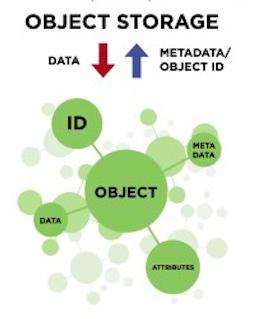 The object storage is a tool for archiving data between cloud computing.

Object storage and block storage represent the two storage services in the cloud. Above we focused on the Block storage; we have seen how it works and what the solutions available in the Cloud are. Now, we will focus, instead, on the object storage.

The Object Storage is an architecture that manages the data as objects, in contrasts to other storage architecture like file system, which provides the management of data according to a hierarchy of files treated as blocks within individual sectors. Each Object typically includes the data, a variable amount of metadata and a globally unique identifier. The Objet Storage can be implemented in multiple levels and includes the device level, the system level and the interface level.

The data held on devices Object Storage can be accesses directly through the API or http/https, can store any type of data, photos, videos and log files. This type of storage ensures that data is not lost. Data stored in this way can be replicated across multiple data centers and offer simple interface for Web access.

A simple to use the Object Storage may be represented by the use of service as a means of storage for developers who work with large quantities of media and need unlimited storage. The Object Storage, in fact, become gradually more and more attractive as soon as the data to be archived increased dramatically, as happens to with eNlight Cloud Services that allow users to upload media files (especially video).

Storage of unstructured data such as music, pictures and video, but also backup, database dump and log files are the most common cases of use of the Object Storage.