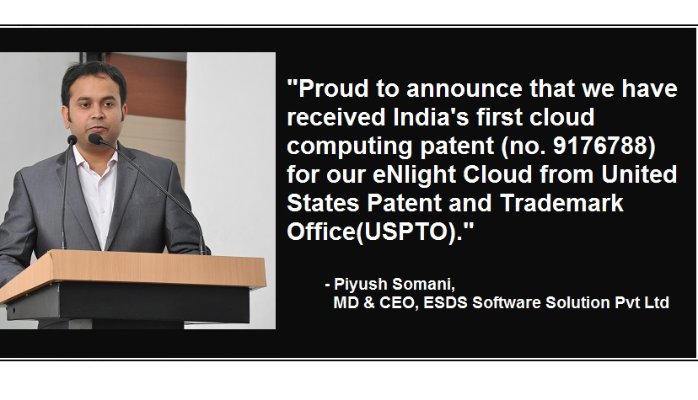 3rd November 2015, we got USPTO patent for our eNlight Cloud platform. The patent is titled “Method and system for real time detection of resource requirement and automatic adjustments” bearing the patent No. 9176788 ( Ref :- https://lnkd.in/baQhis7 ).

Simplified meaning of this patent is “Real time adjustment of CPU, RAM, Disk Space and other resources in a virtual machine based on the resource requirements of the Virtual machine running in the Cloud”

Everyone at ESDS got super excited, as we were working really hard to make eNlight Cloud successful from last 4 years. Though we were very optimistic about this patent, but the obstructions created by some of the American giants during the patent review process had got us concerned. Process of on-boarding some of the large Indian Enterprises and British SME customers continued since 2011 and we could convince some of the most popular CIO’s in the industry to host with us on the eNlight Cloud platform. Our belief in our vertical auto-scaling platform and the reason our concept served the need of majority of the online community continued to strengthen as we continued to on-board highly valued Enterprises. We experienced some downtime with our Cloud platform in 2012 due to Storage level issues. 2nd downtime in the same year got us concerned and top management chose to speak to the customers directly after the downtime. What we heard from majority of our customers got each of us surprised. None of our customers wanted to move on any other platform nor did they ask for any compensation. Some of our highly techno savvy customers had perfect understanding of the product and what went wrong with the solution, they clearly mentioned that eNlight was a perfect match for their requirement and it was no big deal for them to support eNlight, as the auto-scaling feature of eNlight had supported their business needs during their peak business hours and the most important seasons of their business. After those 2 incidents we decided to revolutionize our storage subsystem and from last 3 years we’ve not had any downtime. This patent from USPTO arrived at the right time. We are now fully prepared to take our eNlight Cloud to a much bigger platform and transform the Cloud industry which could not find a perfect match in the horizontal scale-out cloud model from other Cloud service providers.

One of the Analysts from the top Technology Research and Advisory firm mentioned that with the “pay-per-consume” billing model, we will be transforming this highly commoditized business of IaaS into a utility model. Startups, Banks, Telco’s and Enterprises will now be able to pay for only what they consume. They won’t need to have trained resources to continuously adjust their Compute and keep watch on their billing. This will enable them to focus on their core business and let the cloud do its work. Their billing will be higher when they do a lot more business and they’ll save significant amount of cash in the off-season period.