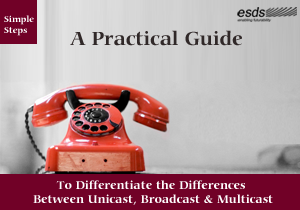 Data is transported over a network by three simple methods i.e. Unicast, Broadcast, and Multicast. So let’s begin to summarize the difference between these three:

Note: There is no separate classification for Many-to-Many applications, for example, video conferencing or online gaming, where multiple sources for the same receiver and where receivers often are double as sources. This service model works on the basis of one-to-many multicast and for that reason requires no unique protocol. The original multicast design i.e. RFC 1112, supports both the ASM (any-source-multicast) based on a many-to-many service model and the SSM (source-specific multicast) based on a one-to-many model.

So let’s Dig Deeper into this subject

Unicast: traffic, many streams of IP packets that move across networks flow from a single point, such as a website server, to a single endpoint such as a client PC. This is the most common form of information transference on networks.

Broadcast: Here, traffic streams from a single point to all possible endpoints within reach on the network, which is generally a LAN. This is the easiest technique to ensure traffic reaches its destinations.

This mode is mainly utilized by television networks for video and audio distribution. Even if the television network is a cable television (CATV) system, the source signal reaches all possible destinations, which is the key reason that some channels’ content is scrambled. Broadcasting is not practicable on the public Internet due to the massive amount of unnecessary data that would continually reach each user’s device, the complications and impact of scrambling, and related privacy issues.

On an IP network, destinations (i.e. clients) do not regularly communicate straight to sources (i.e. servers), because the routers between source and destination must be able to regulate the topology of the network from unicast or multicast side to avoid disordered routing traffic. Multicast routers replicate packets received on one input interface and send the replicas out on multiple output interfaces.

So what is the difference between Multicast and Unicast?

There are two central methods that Windows Media servers use to send data to Windows Media Player clients i.e. Unicast and Multicast…

Multicast or Unicast can be used for broadcasting live video or audio. Your network setting by default determines who your clients are and what sort of broadcast you need to prefer.

1. Traffic is sent from one host to another. A replica of each packet in the data stream goes to every host that requests it.

2. The implementation of unicast applications is a bit easy as they use well-established IP protocols; however, they are particularly incompetent when there is a need for many-to-many communications. In the meantime, all packets in the data stream must be sent to every host requesting access to the data stream. However, this type of transmission is ineffective in terms of both network and server resources as it equally presents obvious scalability issues.

3. This is a one-to-one connection between the client and the server. Unicast uses IP provision techniques such as TCP (transmission control protocol) and UDP (user datagram protocol), which are session-based protocols. Once a Windows media player client connects via unicast to a Windows media server that client gets a straight connection to the server. Every unicast client that connects to the server takes up extra bandwidth. For instance, if you have 10 clients all performing 100 Kbps (kilobits per second) streams, it means those clients taking up 1,000 Kbps. But you have a single client using the 100 Kbps stream, only 100 Kbps is being used.

Multicast lets server’s direct single copies of data streams that are then simulated and routed to hosts that request it.

Hence, rather than sending thousands of copies of a streaming event, the server instead streams a single flow that is then directed by routers on the network to the hosts that have specified that they need to get the stream. This removes the requirement to send redundant traffic over the network and also be likely to reduce CPU load on systems, which are not using the multicast system, yielding important enhancement to efficiency for both server and network.

The multicast source depends on multicast-enabled routers to forward the packets to all clients’ subnets that have clients listening. However, there is no direct affiliation between clients and Windows media servers. The Windows media server creates a “.nsc” (NetShow channel) file when the multicast station is first formed. Usually, the .nsc file is sent to the client from a web server. This file holds data that the Windows media player requires to listen for the multicast.  This is quite the same as fine-tuning a station on a radio. Every client which eavesdrops on the multicast includes no extra overhead on the server. In fact, the server sends out only a single stream per multicast station. The equal load is experienced on the server whether only a single client or multiple clients are listening.

Multicast on the Internet is usually not a concrete solution because only small sections of the Internet are enabled with Multicast. On the other hand, incorporate environments where all routers are multicast-enabled can save quite a bit of bandwidth.