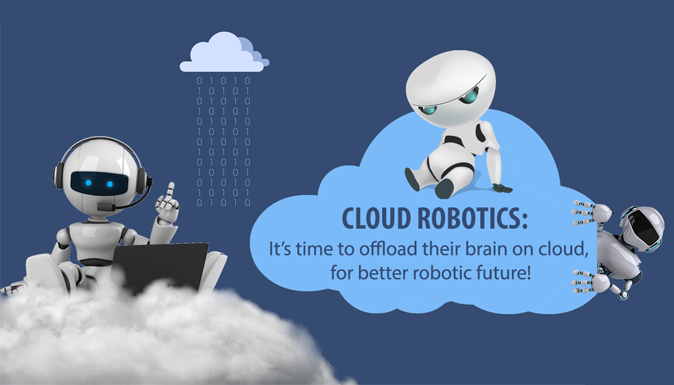 Cloud robotics is an emerging field of robotics ingrained in cloud computing. It allows robots to benefit from the powerful computational, storage, and communications resources of modern data centers.When computational or storage demands exceed the on-board capacity of a robot, they are offloaded to the cloud, where the massive resources of a datacenter can supplement their limited local resources.

So cloud robotics includes other internet related aspects of robotics such as trends towards online sharing of open source hardware and software, crowd sourcing of robotics funding tele presence and human based computation.

Imagine a robot that finds an object that it’s never seen or used before. The robot could simply send an image of the object to the cloud and receive back the object’s name, a 3-D model, and instructions on how to use it. This is cloud robotics.

Cloud-enabled robots could offload CPU-heavy tasks to remote servers, relying on smaller and less power-hungry onboard computers. Using the cloud, a robot could improve capabilities such as speech recognition, language translation, path planning, and 3D mapping.

There are some drawbacks of clouds robotics as well:

ASORO labs : Researchers at Singapore ASORO labs have built a cloud computing infrastructure to generate 3D model of environment which allows robots to perform simultaneous localization and mapping. This process is much faster than their computers

LAAS : here scientist are developing robotic objective database for robots to simplify the manipulation task like simple process of opening doors. So in short they are trying to develop software with the help of cloud computing which makes complex task as simple as user manual for robots.

Gostai : this French robotic firm has developed a cloud based robotic infrastructure known as GostaiNet which allows robots to perform speech recognition , face detection and other task remotely. Gostai;s robot uses the cloud for video recording and voice synthesis.

Google’s self-driving cars are one type of cloud-connected robot. The autonomous cars access data from Google Maps and images stored in the cloud to recognize their surroundings. They also gather information about road and traffic conditions and send that information back to the cloud.

Cloud Robotics is still very new and has to undergo a long series of designing and developing. There are many problems to deal with before it goes to mainstream. But it has a real thought provoking potential that inspires the mind on what it does and what it can do in future.

So lets offload their brains on cloud for better robotic future!