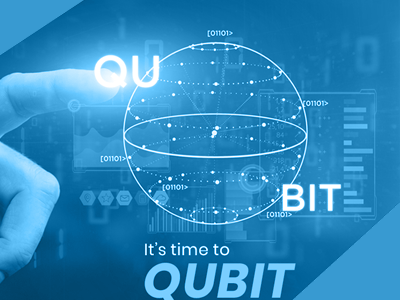 The world has been transforming exponentially in the field of Science & Technology. Quantum Mechanics revolutionized the concept of classical physics. Quantum Mechanics is not limited to theory, it’s a philosophy, it’s a way of new life. It describes there is always ‘n’ nos of possibilities between To be(1) or Not to be (0). Quantum Mechanics can describe the subatomic level interactions, functions and helps scientists to understand Nature and Universe in a better way. Present Classical Computer has a limitation of various complex problems and a time frame to resolve those.

Here comes Quantum Computer with a revolutionary concept of Quantum Superposition of states along with Quantum Entanglement & Quantum Tunnelling enable Quantum Computer to manipulate simultaneously huge combinations of states in the shortest time frame one can think of. They can also process lots of information simultaneously and process it using far fewer operations than their classical counterparts.

Present Digital Computer consists of binary digits, i.e., Bits -1 & 0 representing the states of charge on transistors /chips. The foundation of the classical computer based on On (1) or Off (0) -the binary bits, means if one tosses a coin -it may be Head’s Up (1) or Head’s Down (0), no intermediate state. However, in Qubits – it may be Up(1) or Down (0) or a coherent superposition of both 1 & 0. To make easy, let us illustrate – if one tosses a coin, now it is spinning – can anyone tell whether it is Head is up or down as we could not predict the state until it stops. Therefore, the Outcome may be all possible probabilities, not restricting 1 & 0. E.Schrödinger described the situation almost 85 years ago in a thought experiment called ‘Cat Paradox’, where a cat is locked up in a steel chamber with a Geiger counter with a small radioactive substance, a hammer, and a small flask of Hydrocyanic acid (HCN). If after a certain point the radioactive atom would decays and though a relay system triggers the hammer that breaks the flask of the acid. If someone left the entire system for one hour it would be difficult to say whether the cat is alive or dead without opening up the system, which means there is a probability maintain both states ( death or alive) at the same time. In summary: Bit can only take a state of 0 & 1, whereas Qubit can take any state. If there are 2 Bits, then these Bits can represent as 2^2=4 Values in Total:  00   01  10 11, but they can only hold 1 of these four values at a time. However, if there are two qubits, then these qubits together can hold these four values simultaneously! That is the beauty of Quantum Computing!

Entanglement is the fact that the state of a particle influences the state of its counterpart even though they are separated by a large distance, which is completely different from classical mechanics’ principle of local realism. The property of entanglement can be better observed if two particles are separated at a distance and now if we measure a particular characteristic, say spin of a particle and get ‘up spin’, other will be found ‘down spin’(complimentary state), thus it is possible to prepare two particulars in a single quantum state, in simple words – when electron A interacts with electron B, one will take on an up-spin state, while the other takes on a down-spin state. Any variation in the spin of one instantly affects the spin of the other, irrespective of distance. Sometimes position, momentum, spin, and polarization performed on entangled particles can be found to be perfectly correlated. This incredible linking stimulated Einstein to describe entanglement as “spooky action at a distance’’.

Quantum tunnelling is the quantum-mechanical effect of transitioning through a classically prohibited energy state means a subatomic particle can pass through a relatively high potential energy barrier.

An easy way, if we consider rolling a ball up a hill but lack enough velocity to roll over the hill, it will come down means with a lesser kinetic energy a particle can not cross over the higher energy barrier. This is a case for classical mechanics, but in quantum mechanics, objects exhibit wave-like behavior, and the probability of finding the quantum particle at the other sidehill is there, this behavior is called the Tunnelling, as if the particle tunnelled through the potential hill. Though it sounds strange, tunnelling has been widely applied in modern devices and modern experimental techniques, such as the tunnel diode, the scanning tunnelling microscope( STM), IC designed at nanoscales, and so on. Quantum tunnelling plays an essential role in many quantum phenomena, such as the tunnelling of superconducting Cooper pairs and alpha decay.

Moore’s law has been prevailing through several periods said that the computing power of all-silicon chip-based computers would double every two years. This law helps to tell the rate of enhancement of the transistors’ numbers to be integrated into a silicon microchip. According to Hartmut Neven of Google, the computing power of the quantum computer is experiencing “doubly exponential growth relatively to conventional computing”.

Quantum computers’ edge over the classical ones is a result of two exponential factors.

Google, IBM, Microsoft are working on Gate Model while D-Wave is working on Annealing Model.

Gate Model is the best and flexible type of Quantum computing, but the present difficulty is to maintain the stability of Qubit. The problem increases as the number of qubits grows leading that computers are still in laboratories without tested with practical applications whereas in Quantum Annealing it is easy to build stable annealing processors & qubits through its least flexible but commercially viable to solve optimization problems at the present situation.

In Universal Quantum Gate model replaces the classical gate. This model initializes the wave function, applies gate sequences, and measures the wave function. Gates in the Quantum model are reversible( like NOT gate of the classical gate). Hadamard(H), Pauli( X, Y, Z), Toffoli (CCNOT), and many more gates are used in the Quantum Gate Model. Shor’s and Gover’s algorithms are widely used algorithms.

Quantum Annealing’s focus is on optimizing the lowest energy state by considering the superposition, entanglement, and tunnelling properties of qubits. Quantum Annealing is mainly performed better for optimization problems.

It looks like a Chandelier made of Copper tubes & wires with a superconducting chip at the core where qubits are placed. Google Introduces a Quantum computer, named ‘’Sycamore’’.It has 54 Qubits but one Qubit did not work. The Qubits are Niobium made micro capacitor having no fixed states. Between them, tiny couplers are consisting of small antennas that respond to microwaves, called microwave resonators. On 23rd Oct 2019, Google published an article about Quantum Supremacy in ‘Nature’ and demanded that machine performed computation in 200 seconds which can be executed by the world’s fastest computer in 10000 years!

Many scientists believe that Qubit in Quantum Computer is too fragile to control, but Google’s experiment gave them a big jolt that 53 Qubit device was able to connect 9 quadrillion amplitudes for computation work, surpassing all the supercomputers on earth. The Quantum computer worked the outcome was overwhelming.

IBM has started registering Quantum Computer Q-5 Tenerife in 2016 having 5 QB. IBM announced a road map on 15th September 2020 for the development of Quantum Computer with an aggressive target of the building of 1000 Qubit Quantum Computer by 2023. IBM is now doing scalable Quantum Systems. IBM uses Transmon Qubit which behaves like an artificial atom and superconducting inductor (Josephson Junction) is kept at 0.015Kelvin (-273.14 °C) along with Niobium capacitors.IBM has introduced the IBM Q experience program to experience various quantum devices connected through the cloud.

Microsoft also joined the Quantum computing bandwagon. They announced Azure Quantum, partner-centric quantum computing. They are collaborating with Honeywell, IonQ & QCI for Hardware. They also introduced Quantum Development Kit, an open-source development for development and optimization. But, they are yet to report any working Qubit.

D-Wave’s Quantum processing unit is based on Quantum Annealing. They have registered the first 128 Qubit D-Wave One in 2011. Recently (29th September 2020) they have announced 5000 QB D-Wave ‘Advantage’ having 15- way qubit connectivity.

De-coherence is the biggest issue in present quantum computing using the gate model. Quantum Computing is susceptible to noise and errors though experts are finding ways to suppress de-coherence, and they’re making improvements every year. Though Quantum computers are in the research state, IBM, Google, Intel are investing hugely in creating a better and stable system. But there is a need for technology vendors to collaborate with clients to solve real problems. Many organizations have started working with IBM‘s Quantum programs. Daimler is working on designing new batteries with IBM using the Quantum algorithm, Exxon is working to discover new materials for more efficient capturing carbon. JP Morgan Chase is collaborating with IBM for risk management.

In the coming days, Quantum Computing in the cloud has likely to disrupt industries like other advanced technologies like IoT, AI, etc. The cloud would be the perfect way to consume quantum computing as it has low I/O but deep computation. Presently cloud is being used mainly in quantum computing to provide application development and provide a test environment.IBM has first launched quantum experience over the cloud platform and started an open-source quantum software development platform, named Qiskit. Amazon & Microsoft also introduced quantum cloud services. Google is expecting to come up with a cloud service for quantum computing this year. D-Wave is suited for many optimization issues while QuTech is working on a cloud offering of its small quantum machine.

The future lies in Quantum Computing that will easily decode the complex situations and invent new possibilities and definitely will rule out ‘to be’ and ‘not to be’ state, and the world will be quantized.