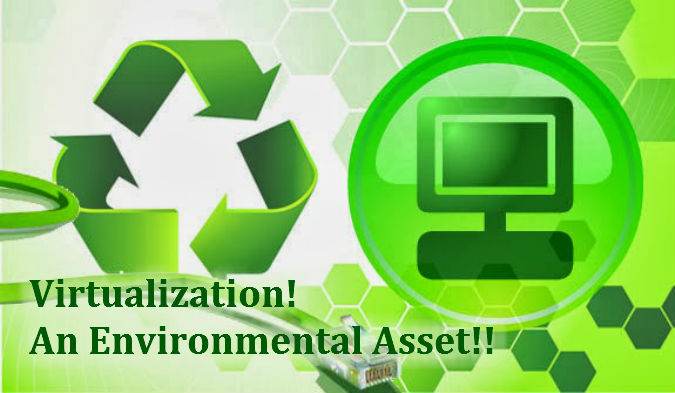 In this age of rapid upgradation and the need for progression, electronic devices are easily prone to get outdated. This results in sums of e-waste. World’s e-waste is anticipated to grow 33% by 2017 according to the global reports. Accumulation of e-waste prompts to resource shortage and environmental contamination, making it a disquiet to give a thought upon and take opted steps towards ‘Virtualization’ to make greener tomorrow!

Virtualization can be the simplest and cost efficient step taken to reduce e-waste. It comes hand in hand with the aid of reduction in CAPEX (Capital Expenditure) & OPEX (operational Expenditure) resulting in ‘TOTAL PROFIT’. Virtualization as the concept specifies an act of creating something (such as Computer Hardware, OS, Storage, etc.) virtually, to facilitate one with the similar comfort of operations as provided in the physical environment, but of course with aid of advantages.

Hardware is not simulated but similar software interface is provided to the virtual machine. Every virtual machine operates individually in different environment, but guest instructions need to be modified to suit virtual environment.

Hence, Hardware virtualization results in reduction of IT Hardware such as CPU, Memory devices, Storage devices, Network devices, etc. ultimately resulting in lowering of IT e-waste and power consumption.

Application level virtualization: It hosts multiple Applications in separate environment than lurking OS. Ex. Suppose an application needs to be run on different OS environment i.e. other than the host OS, then virtual machine runs the required OS for that application being host on the same OS. This result in ease of maintenance and upgradation, free from any OS restrictions and reduction in required cost to carry machines physical environment for respective OS, and provides flexibility for the user.

It hosts multiple virtualized environments inside one OS ground Ex. Required OS can be run through virtual machine without altering original OS. This results in reduction of Physical machines in an organization required for different environments and cost related to it, along with reduction in power consumption prompting to energy saving.

Virtualization being a blessing for organizations provides cost and productivity effective outcomes also equally contributes in going green, by serving:

With the knowledge of benefits of Virtualization, it is indeed An Environmental Asset, proving a boon for optimal utilization of IT resources and resolving environmental issues, arising due to IT e-wastes, rise in power consumptions and space utilization, globally, towards greener tomorrow!!!

Follow me on
Vaishnavi Kulkarni
Online Marketing Executive at ESDS Software Solutions Limited
Vaishnavi is an Engineer and a blogger with an acute inclination to technology, especially the computing technologies. At ESDS, she explores cases of PaaS and related technologies and gives consultation by means of blogs. Connect with her over Twitter and Facebook.

Follow me on
Latest posts by Vaishnavi Kulkarni (see all)