So the Internet is a powerful communication tool and offers a vast and varied amount of information from many different subjects. It is also used for data transfer and can work with file types such as documents, images, audio, video and more.

The Web is seen by the user as a global collection of documents, these documents are typically called pages or Web pages only. Each page can contain links, better known as links to other pages when the user clicks one of these links is taken to the next page, this idea of a page to point to another is known as hypertext, the second concept was created by a professor at MIT (Massachusetts Institute of Technology), Vannevar Bush in 1945, well before the creation of the internet.

HTTP – Hypertext Transfer Protocol is an application layer protocol of the Internet. HTTP is divided into two parts, the client program and dedicated server program, both programs run on different machines talk to each other by means of HTTP messages. HTTP defines the structure and these messages are exchanged between the client and server.

The web pages consist of documents or files of various formats as discussed above, these pages are built with HTML (HyperText Markup Language) which is the standard language for programming web pages, built in the page HTML is interpreted by a browser, which is regarded as HTTP client. The text pages or HTML documents are also considered by the HTTP protocol.

A web page (also called document) is built of objects. An object is simply a file – such as an HTML file, a JPEG, a GIF image, a Java applet, an audio clip and so on – you can access with a single URL. Most web pages are constructed on HTML file base and several referenced objects. For example, if a web page contains an HTML text and five JPEG images, so it will have six objects:

Web pages are on a web server, with may be several other pages. The customer or user accesses the page through a browser that interprets the HTML code and builds the page that is being viewed by the viewer. A simplified explanation of the operation would be as follows: the client makes a request for a page to the server via HTTP to the client and the server responds with the requested page, as can be seen in figure mentioned below. 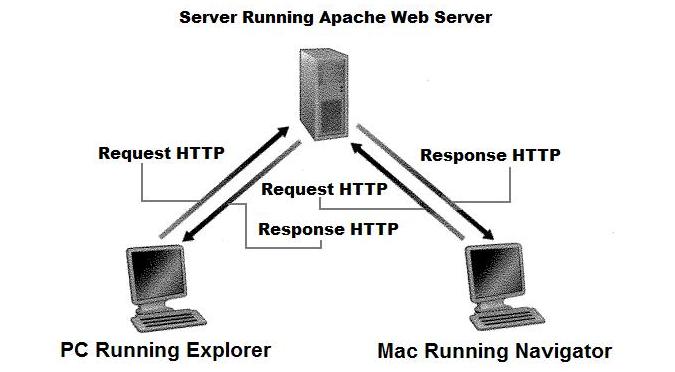